Be Beautiful Be Yourself Fashion Show Recap with Missy & Addie

On Saturday, October 24th, the Global Down Syndrome Foundation hosted their annual Be Beautiful Be Yourself Fashion Show, which raised $2 million dollars to benefit the Linda Crnic Institute for Down Syndrome. We had the pleasure of speaking with Missy Holman, Executive Director of the Down Syndrome Foundation of Southeastern New Mexico, and her nine year old daughter Addie, who was selected as a model for this year’s fashion show, about their experience with this event. 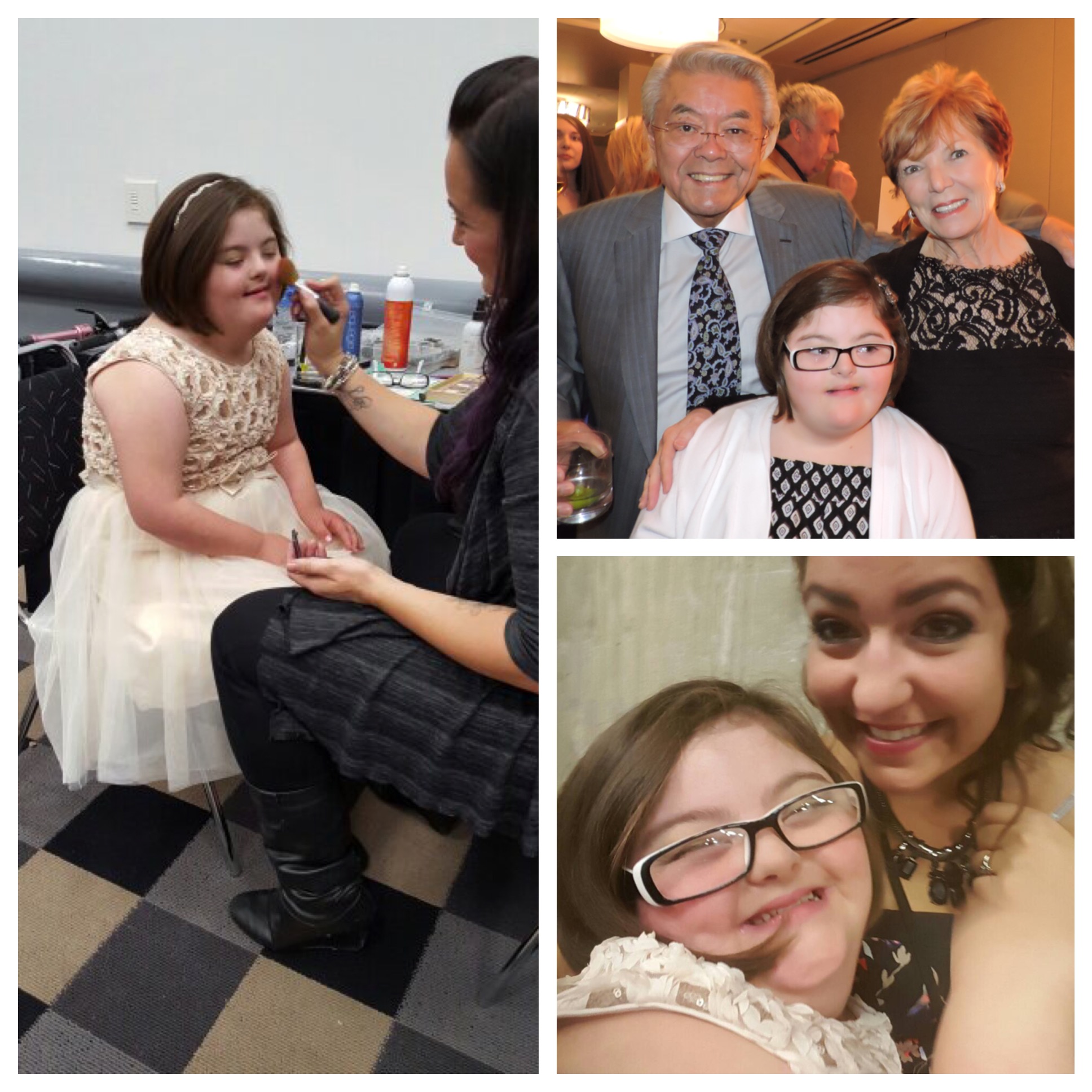 Missy was quick to share that “Global does everything really, really well,” and she and Addie explained the audition process for the fashion show. Each year, there are open auditions for the 20 models that participate in the show; fortunately, this year the Holman family had time to travel to Denver for the auditions. At the beginning of the audition, Michelle Sie Whitten (President and CEO of the Global Down Syndrome Foundation) welcomed them, and then a Denver Broncos cheerleader demonstrated what they should do when it was their turn to audition. There were around 100 people auditioning, from ages 7-42, and they were placed into groups of 25-30 people for the auditions. Addie was in the third group, and she wanted to go backstage by herself even though Missy could have gone with her. “Addie did a really amazing job,” Missy shared, and she was “very blessed and fortunate that she was chosen” by the panel of judges who had the daunting task of choosing only 20 models for the show. Missy was blown away that Addie was chosen, because there were so many people there for the auditions.

The weekend of the event, the Holman family returned to Denver, and Addie told us how they “went and tried on the dresses at Nordstrom’s”, with Missy adding that “there were three beautiful dresses waiting in the fitting room”. Addie described her dress to us, saying that it had “sparkles on the top with flowers, a tulle skirt; it was beautiful,” and giggling, she added “I said ‘Yes!’ to the dress!” Missy agreed that the dress was “really amazing”, and they had fun acting like superstars everywhere they went, with Addie telling everyone that she was going to be a model in the show. 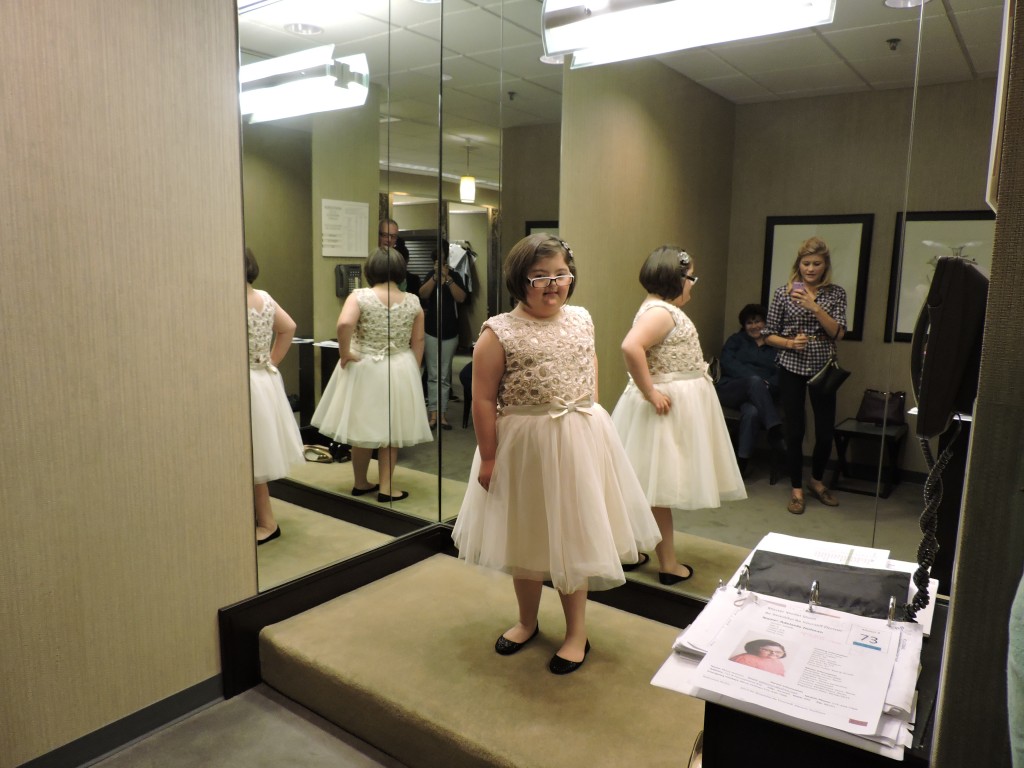 For the fashion show, each model is paired with an escort from an impressive panel of celebrities. Upon hearing that she would walk the runway with Jamie Foxx, Addie was so excited, especially after “Daddy showed me that he was on Annie.” Missy described the celebrities who participated in the fashion show as “genuinely kind and good,” and “thrilled and honored to be there and support what’s going on.” She went on to say that it is apparent that “globally there is a change of mindset happening” when it comes to awareness and support for those with Down syndrome. Throughout the weekend, the celebrity escorts were able to forge quick friendships with their models; Missy shared that “one of the Broncos players had a self-advocate up on his shoulders, just having a great time together. They were taking interest in Down syndrome as a movement.”

When Addie walked out on the runway, Missy shared that “it was amazing; everything is done so well, and not done in a way of empathy or pity, or being marginalized. When each model was on the runway, it was a showcase of who they were, the greatness of who they are, who they can become, and who they have already become.” Missy continued that she was “super proud of Addie as her mom, but also really proud of our movement to know that there is so much greatness.” Addie said she was “so excited” to be on the runway, and told us all about how to “strike your pose and go back” when it’s your turn on the runway.

Addie’s favorite part of the whole night was spending time with her volunteer pal, Nanastasia (who works for Denver Children’s Hospital); they took lots of photos together backstage. It was very reassuring for Missy to have someone backstage with Addie; this was just one of the many details that Global thought to provide for the families participating in the event.

Missy’s favorite part of the night, of course, was seeing Addie on the runway; it was an “overwhelming and amazing” moment. However, she says that “there’s not any moment that I would want to lose.” Missy and Addie agreed that the food was fantastic, too!

After hearing that $2 million was raised at this event, Missy was “thrilled and so excited that all Global’s hard work is paying off. Everywhere I looked that night, I was just blown away and amazed by all the detail they put into the event. To see how far they’ve come in such a short time is just amazing, and I’m so grateful to know them at Global! Michelle has been so kind and so concerned with how she can help…that spirit of service is how they’ve gotten where they are. It’s comforting to know that there are groups of people out there who are really concerned with how to change the future. As a mom, that makes me completely behind what they’re doing.”

Addie didn’t hesitate to tell us that she would like to model again, which is absolutely understandable after we learned about all the fantastic details of the event. Missy was very impressed with everything, from the great location, to guests who were so generous in their giving to support the cause, to the food, to the number of volunteers that were there. “The event had a great warmth!” Also, by participating in the event, Addie unknowingly encouraged a woman in attendance who has a child with Down syndrome. “Not only are we raising all this money, but we’re giving moms hope, too!”

Missy told us that Addie is now a local celebrity after a “huge write up” in their newspaper. “She is so happy that everyone is so proud of her!” We’re proud of you, too, Addie!

To learn more about the Be Beautiful Be Yourself Fashion Show, please visit http://bebeautifulbeyourself.org/.