Jack Rovetti recently celebrated his 17th birthday. A junior at Reno High School, he loves to play Xbox (and has a desire to work for Microsoft someday, because they make the Xbox!), is a manager for the football team, and is “just a great kid”. Jack, who happens to have Down syndrome, also helps to run the family business, a Doc Popcorn franchise. This is something his family hopes will provide him with future opportunities of employment. We were fortunate to chat with Jack’s mom, Diana, about Jack’s Popcorn Company.

Jack’s dad loves popcorn, and several years ago they saw a franchise opportunity while visiting California. They had been looking for a small business opportunity for Jack, and liked the popcorn company’s business model. Once Jack graduates from high school, they hope to have a permanent location so that he can make his own living and go to work every day. For now, though, they mostly work events in the summertime when school is out. They were also recently approved as a vendor for the local convention center, so they are invited to open their booth any time an event takes place. It was initially thought that Jack’s role would be to pop and bag the popcorn, but he prefers to run the cash register. “We let him show us what he is capable of,” Diana explains, and he does “really, really well with the money!” Modifications such as color-coded keys, and a cash register that shows how much change should be given back, assist Jack in finding success at work. 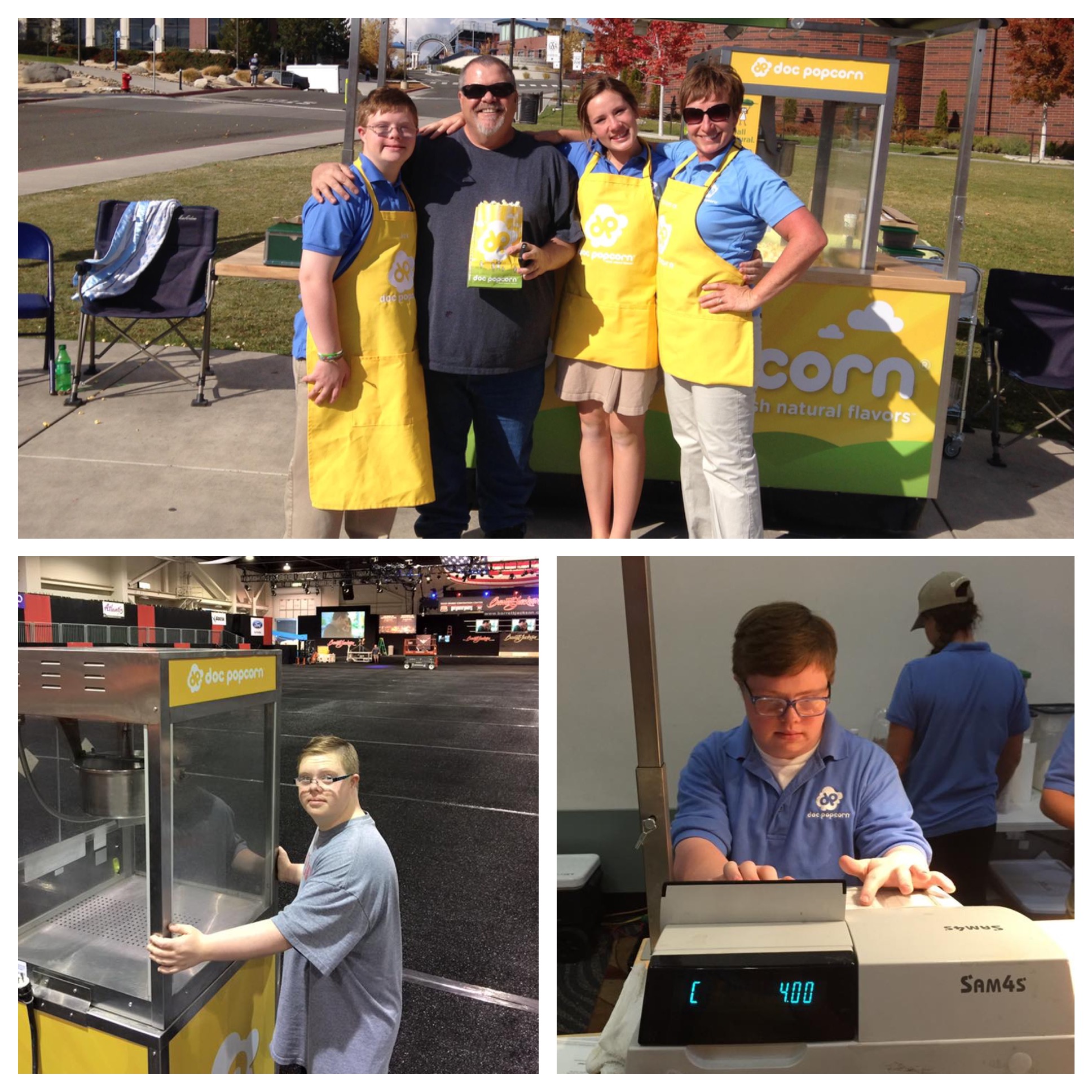 Jack really enjoys interacting with his customers; he’ll say “Enjoy your popcorn!” as he is handing back change. He loves it when a customer leaves a tip, and he can feel the vibes from the people who are more open to him being there; he is more conversational with those people. This opportunity has “made him a lot more self-confident,” says Diana. “He has really come out of his shell. It’s cool, because there is stuff that I wouldn’t have even thought would be a benefit,” she says.

Self-confidence isn’t the only thing Jack is learning from having a business. It’s teaching him how to measure things (while making the popcorn), how to talk to people, and how to manage money. Recently, Jack has expressed a desire for more independence and has been attending his classes at school without an aide. Having his own business has definitely helped him mature. Jack is also learning to set goals; he loves to travel and is currently saving up money for a cruise. Long term, he wants to be able to make enough money to be independent and live on his own after high school. He is also building a strong work ethic; he is learning about job responsibilities (like going even when you don’t want to go), being on time, and appropriately dressing for work.

While the Rovetti family has certainly bonded over the experience of running a family business, Diana wasn’t shy to admit that there are challenges. “It’s hard. It hasn’t been all rosy. Sometimes he really doesn’t want to do it. Sometimes he refuses to do it. In the end, I know it’s going to be worth it. We’re going to stick with it!” We ended our conversation with Diana stressing that although it can be difficult, “It’s a really fun family thing to do! It’s work, but it’s also fun because we’re all together.”

To learn more about Jack’s Popcorn Company, visit his website at www.jackspopcorncompany.com and his Facebook page. Anyone local to Reno may order online for pick up, and their events are also listed online.